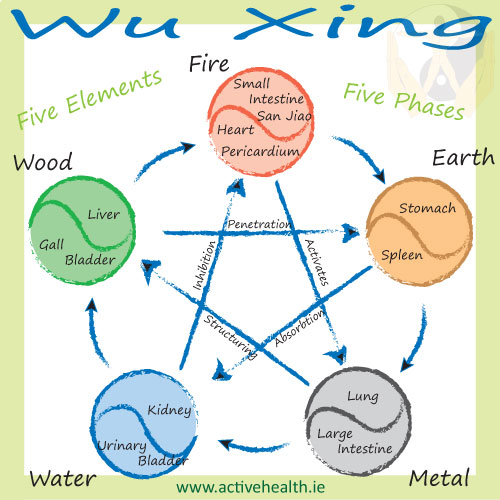 Wu Xing, translated as the Five Elements, Five Phases, the Five Agents, the Five Movements, Five Processes, and the Five Steps/Stages, is a conceptual scheme that many traditional Chinese fields used to explain a wide array of phenomena, from cosmic cycles to the interaction between internal organs, and from the succession of political regimes to the properties of medicinal drugs.

The “Five Phases” are Wood, Fire, Earth, Metal, and Water. This order of presentation is known as the creation or generation sequence. In the order of mutual conquest or mutual overcoming, they are Wood, Earth, Water, Fire, and Metal.

This comprehensive theory goes one step beyond showing how all things are related and connected in five categories to reveal how everything is interconnected and interacts on a mega scale. The Five Elements are five fundamental energies in nature in motion. There is a dynamism between them; they are not static. Within the structure of the Five Elements there are two fundamental relationships: generation and control. Without the balancing nature of these two relationships, things would fall out of order in a flash.

When the Five Elements speak about generation, it means a relationship that nurtures and promotes growth. Think of a mother and child. The mother gives birth to her child and provides her energy to ensure the growth of her child. An example of generation is the relationship between the Heart and the Spleen (the Heart generates the Spleen).
Control, in terms of the Five Elements, represents a relationship that acts as a restraining energy or force, making sure that things do not grow too quickly or slowly, neither too strong nor too weak. Without control, things would fall out of proportion; balance would be lost. Both are needed to keep order: order at the individual level and on a cosmic scale. (Example: the Liver controls the Spleen.)

Five Element theory is essential to the practice of TCM as a healing system. It provides a framework in which to understand, diagnose, and treat all health issues—body, mind, emotions, and spirit. The Five Elements include the internal organs, and the interconnected and interacting relationships between them often fall out of balance, creating health issues. TCM practitioners seek to rebalance these organ relationships with their treatment plans.

The Five Elements support TCM’s body-mind-spirit understanding of human health. TCM’s ancient Five Element theory is an incredibly detailed master blueprint that diagrams how nature interacts with the body and how the different dimensions of our being impact each other. Though we may not be aware of it, each action, thought, and emotion impacts in some way our being and health as well as the balance of nature.

Which Element are You? 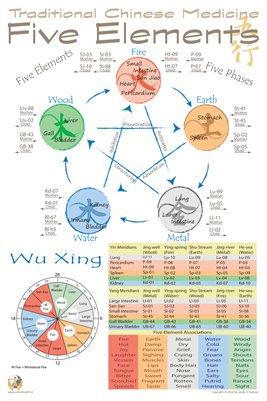