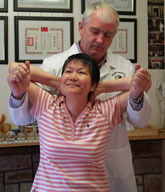 There is a lot that can be said about the many modalities of massage, but my personal favourite is Tuina Chinese medical acupressure.

Tuina (pronounced twee nah) falls under the category of Qi Gong acupressure which is based in Traditional Chinese Medicine (including acupuncture, herbal therapy, dietary therapy and medical Qi Gong). Tuina literally means “Push Grasp”. This method of massage was developed by Chinese healers over the course of several centuries. Often referred to as “sports massage” but it is so much more than that. In China, Tuina is practiced in the largest hospitals integrated with Western medicine to treat both external conditions from broken bones, frozen shoulders, tennis elbows to Internal conditions like Headaches, PMS, Dizziness, Insomnia.

I have used Tuina to help ease the pain of Migraine, Sciatica, as well as other chronic pain conditions. My patients report they have never had such powerful, moving massage before and prefer Tuina to Swedish or Deep Tissue massage. I personally prefer it because it allows me to affect a more penetrating release for my patients without the pain usually attributed to therapeutic massage.

Tuina can be used to treat ailments in children as well. The meridians in a child’s body are not fully developed, so a much milder treatment than for an adult and Tuina is a very suitable substitute for acupuncture because of this. In my own clinic I have treated children as well as adults. While practicing in Guo Yi Tang Hospital, in Beijing, I had an 8 month old child patient who had a haemorrhage in the brain. Her doctors told the parents that they should let the child go as she may not survive the trauma and the prognosis was not good. As a last resort, the parents brought their child to the hospital and I was assigned to treat her. When I met the parents and child, I was disheartened by her condition. She had no spirit in her eyes, she was totally still and silent except for the activity of the respirator and other apparatuses attached to her. At that moment my confidence in Tuina was severely tested and I have to admit I said a few prayers as well. I remembered an acupressure protocol from my very first teacher in Taiwan “Hung Shui Chen” and I used it every day. By the end of one week the spirit had returned to the little girl’s eyes.

Want to BOOK a Session and find out the cost?