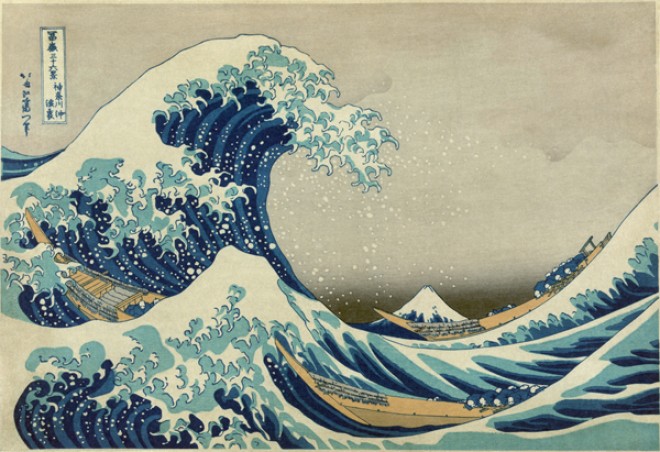 In the early days of the Meiji era there lived a well-known wrestler called O-nami, Great Waves. O-nami was immensely strong and knew the art of wresting. In his private bouts he defeated even his teacher, but in public was so bashful that his own pupils threw him.

O-nami felt he should go to a Zen master for help. Hakuju, a wandering teacher, was stopping in a little temple nearby, so O-nami went to see him and told him of his great trouble. “Great Waves is your name,” the teacher advised, “so stay in this temple tonight. Imagine that you are those billows. You are no longer a wrestler who is afraid. You are those huge waves sweeping everything before them, swallowing all in their path. Do this and you will be the greatest wrestler in the land.”

The teacher retired. O-nami sat in meditation trying to imagine himself as waves. He thought of many different things. Then gradually he turned more and more to the feeling of waves. As the night advanced the waves became larger and larger. They swept away the flowers in their vases. Even the Buddha in the shrine was inundated. Before dawn the temple was nothing but the ebb and flow of an immense sea.

In the morning the teacher found O-nami meditating, a faint smile on his face.

He patted the wrestler’s shoulder. “Now nothing can disturb you,” he said. “You are those waves. You will sweep everything before you.”

The same day O-nami entered the wrestling contests and won. After that, no one in Japan was able to defeat him.

Each of us has the capacity to be a success. We can sometimes give so much power to the world around us that this restricts our self esteem, limits our potential. O-nami already had the strength, he was not lacking in fitness. He had the practiced skills necessary to compete and win. He knew his potential. He just lacked the “sight” the belief in who he was.

Learning the art of Meditation or other rituals is practiced by successful people in all aspects and disciplines in life. They calm the mind, prepare it to accept success in all its guises, whether in business, sports, love or life in general.

The story of O-nami demonstrates that when we meditate or visualize success, it soon becomes reality. “I think therefore I am”

James O’Sullivan from Galway is a credible and engaging speaker, a people friendly practitioner and lecturer of Integrated Medicine, serving his patients, his students and the public with the positive benefits of both Conventional Western Medicine and Traditional Chinese Medicine. He is a respected author and has appeared on many public media. #jamushur