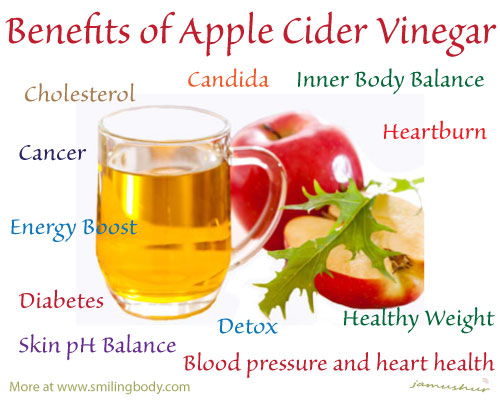 This not so tasty beverage has a long history of household benefits including pickling produce, weed killer, cleaning coffee makers, polishing armour, and dressing salads. It’s also a traditional health remedy, found to treat everything from a salad dressing to skin disorders to sunburn to boost energy.

Today it is easily available in the various health food stores that dot our landscape. Here are some of the benefits of this versatile natural liquid.

The effect of vinegar on blood sugar levels is perhaps the best researched and the most promising of apple cider vinegar’s possible health benefits. Several studies have found that vinegar may help lower glucose levels. For instance, a 2007 study of 11 people with type 2 diabetes found that taking two tablespoons of apple cider vinegar before bed lowered glucose levels in the morning by 4%-6%.

A 2006 study showed evidence that vinegar could lower cholesterol. However, the study was done in rats, so it’s too early to know how it might work in people.

Another study in rats found that vinegar could lower high blood pressure. A large observational study also found that people who ate oil and vinegar dressing on salads five to six times a week had lower rates of heart disease than people who didn’t. However, it’s far from clear that the vinegar was the reason.

A few laboratory studies have found that vinegar may be able to kill cancer cells or slow their growth. Observational studies of people have been confusing. One found that eating vinegar was associated with a decreased risk of esophageal cancer. Another associated it with an increased risk of bladder cancer.

If you are attempting the ideal health weight, add 2 teaspoons of apple cider vinegar to 500 ml (16 ounces) of water. This concoction can be sipped throughout the day. Research shows some limited, yet significant, weight loss benefits from sustained daily intake of acetic acid (which is a main ingredient in Apple Cider Vinegar).

In a 2009 study published in Bioscience, Biotechnology, and Biochemistry, it was found that subjects that consumed acetic acid for 12 weeks experienced significant declines in body weight, abdominal fat, waist circumference and triglycerides. Triglycerides contribute to the bad cholesterol that we want to avoid.

The body constantly strives to achieve a state of equilibrium. Apple cider vinegar helps the body maintain a healthy alkaline pH level. Research shows that higher acid levels (lower pH level) leads to a lack of energy and higher incidences of infection. Hence, my desire to sip some a few times a day for a natural boost of energy.

As part of balancing the body’s pH, apple cider vinegar creates an overall detoxification of the body. Research shows that it can help stimulate cardiovascular circulation and help detoxify the liver.

Apple Cider Vinegar helps to break up mucous throughout the body and cleanse the lymph nodes. Believe it or not, research suggests that apple cider vinegar can help with allergies because of its ability to reduce mucous and sinus congestion. When reducing the effects of allergies, it can also help stave off sinus infections and their related symptoms, such as sore throats and headaches.

This vinegar is rich in natural enzymes that can help rid your body of candida—yeasts that are attributed to thrush in humans. Candida also is blamed for creating symptoms of fatigue, poor memory, sugar cravings, and yeast infections.

Rinsing your hair after shampooing with Apple Cider Vinegar will boost your hair’s body and shine. A practical and safe recipe would be to use an old well washed shampoo bottle and fill it with 1/2 a tablespoon of Apple Cider Vinegar and a cup of cold water. Pour the solution through your hair after shampooing several times a week for impressive results. NB. try a little on your hair first to rule out any sensitivities you may have.

Dilute Apple Cider Vinegar with two parts water, and spread the brew over your face with a cotton ball to replace your current toner. You can do this at night after washing, and in the morning before you apply your moisturiser. A dab of Apple Cider Vinegar can also be left on the skin overnight to fade age spots or acne scars.

You can also use it on warts. Soak a cotton ball in apple cider vinegar, then fasten the cotton ball over the wart with a plaster overnight. The skin may swell some as it reacts with the solution. However, the wart will fall off. Once it falls off, the treatment should be continued for a few more days, to make sure the wart doesn’t return.

Add a cup of Apple Cider Vinegar to your bath, and soak for 10 minutes to eliminate discomfort from sunburn.

Fill a bottle with equal parts apple cider vinegar and water, and shake before applying to the face.

One part vinegar and one part water can be sprayed on your pets fur and rubbed in generously to the skin. Saturate the entire coat, and continue every day for a few days to a week. Any flea infestation will surely be gone.

Apple cider vinegar will clean your toilets and leave your bathroom smelling like apples! Just pour apple cider vinegar into the toilet, and allow it to sit overnight. It can also be used in dishwashers as a substitute for dish detergent. Mix 1/2 cup of apple cider vinegar with 1 cup water, and you can use this solution to clean microwaves, kitchen surfaces, windows, glasses and mirrors, too.

As you can see, apple cider vinegar is a miracle product that cab be used in a multitude of ways. I highly recommend its use!

Apple cider vinegar could theoretically interact with diuretics, laxatives, and medicines for diabetes and heart disease.

If you have diabetes, check with your health care provider before using apple cider vinegar. Vinegar contains chromium, which can alter your insulin levels